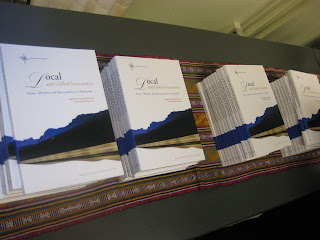 If you are interested in reading other articles included in this book, you can visit http://www.sylff.org/2009/03/11/1886/ and download them for free. For those who are visually impaired, I am happy to send you word files. Please write to me.

Posted by Disability-Uganda webmasters at 12:17

The Finnish Society for Development Research Conference: Knowledge, Development and Academic Partnerships was held at Helsinki University on 12-14.2. It was attended by 150 people, with my rough calculation. 40 papers were presented. This annual conference has been supported by many volunteer students of Development Studies, which is the most competitive discipline to enter in the Social Science Faculty at Helsinki University. I would like to thank the organisers’ and the volunteers' great contribution to this conference.

I think it is over-romanticising to argue the role of researchers in that way because we are next to development agencies: we also select certain context to research with certain viewpoint, which is hardly objective and comprehensive as she claimed. On the contrary, I think researchers are very subjective and use our power in creating knowledge which is highly influenced by our thinking, believes and/or knowledge.

In this four-year-research-project, we still have two more years to develop our participatory research approach. To begin with, we start placing writings of Ugandan persons with disabilities on their life stories in this website.

The conference website is: http://www.kehitystutkimus.fi/index.php?option=com_content&view=section&layout=blog&id=7&Itemid=66
Posted by Disability-Uganda webmasters at 10:16