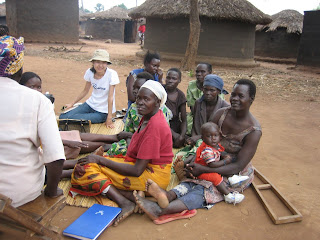 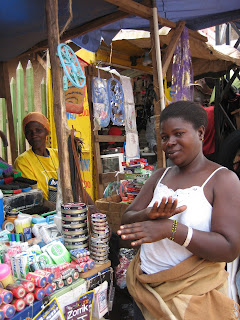 Shopkeeper with disability in the market area ->

I had the great opportunity to visit Uganda in January-February 2008 for my research work on human rights-based approach to development cooperation. My special focus is on the rights of women with disabilities (WWDs), particularly deaf women, in development cooperation activities of disabled people’s organisations (DPOs). In this article, I would like to summarise two aspects of disability movement in Uganda: political achievement and the reality of WWDs on the ground.

Uganda is famous for the development of disability movement in terms of its politics. The rights of disabled people are specifically stipulated already in the Constitution of 1995 as follows, “Persons with disabilities have a right to respect and human dignity and the State and society shall take appropriate measures to ensure that they realize their full mental and physical potential.” Concrete positive changes, for instance, have taken place in creating political space for disabled representatives. After the enactment of the Local Government Act of 1997, affirmative action has been introduced for the marginalized groups of people including women, disabled people, youth, workers and army. Since then, they are represented in Ugandan politics at all levels including Parliament. Uganda has the quota system for five Members of Parliament (MPs) who are representing people with disabilities (PWDs): Four MPs from four regions (Central, East, West, North) and one woman with disability. Their sign language interpreters and personal assistants are paid by the government. An interesting fact is that in the 2006 election, two former MPs representing PWDs stood for the mainstream positions outside of the quota framework and also passed through. Both of them are WWDs. Therefore, there are 7 MPs with disabilities in the Parliament at present. Moreover, 47,000 disabled councillors work in local government structure, of which half of them are WWDs. In 1998, the State Minister for the Elderly and Disability Affairs was created under the Ministry of Gender, Labour and Social Development. This Department vocally addresses the issues of disability though with resource constraint. In 2006, the National Disability Act was adopted which further stipulates the rights of PWDs in Uganda. In 2007, President Museveni joined the International Disability Day event and promised to meet with DPO representatives in 2008. The visibility of PWDs in the political space is outstanding achievement of the disability movement in Uganda. At this political level, it is not over-romanticising to mention that Ugandan disability movement has achieved a lot, although the introduction of the multiparty politics to some extent fragmented disability movement.

The affirmative action policy affected the lives of many. For instance, many students with disabilities enter into higher education institutions with this policy. They get extra points to the entrance examination markings and also get financial support during their study. When I called for candidates to become my research assistant, I was surprised to have received many applications from WWDs with high education background, which was not the case in my previous studies in other countries. Also many shopkeepers in a market area in Kamapala benefit, as they can keep their shops in one of the busiest spots, after the vigorous efforts of the disability councillor of Kampala district. I saw only few beggars with disabilities on the streets. In this way, many positive changes started to take place in the social space as well as in the political one.

However, my interviews also revealed not so rosy picture of WWDs on the ground. Many interviewees mentioned that sexual and/or physical abuse is a big problem for WWDs. One was stabbed by her step-mother and was saved by a church, while others say in a synchronised voice that they have “sex by chance, not by choice”. It was often the case that they are single mothers without husbands because they are stigmatised to be the official partners of WWDs. Official marriage is a dream for Ugandan WWDs, according to many interviewees. As a result, the HIV/AIDS epidemic hits very hardly on WWDs because the society believes that WWDs are asexual and thus are free from HIV/AIDS. There is a surprising statistics that 22% of the studied WWDs were raped in their first sexual encounter (Mulindwa, 2003:32). The same study points out the low usage of preventive measures against sexually transmitted diseases including HIV/AIDS. Too many WWDs cannot negotiate safe sex, which is a silent but great problem. However, it is not an exception for WWDs to live with dignity as both PWDs themselves and the society gradually started to change. I observed many PWDs including WWDs who live positive lives even on the ground.

There is a cynical way to look at this phenomenon of disparity: the government depoliticise disability by the easier solution of disability quota to the political space rather than providing universal rights to PWDs on the ground. I’m not sure about that because I did witness positive changes made in the social space by the political representatives, though some of their capacity is only evolving now. The interplay of the political achievement and social challenges is an interesting theme to elaborate further in the future research. DPOs are playing an important role in this because DPOs deeply collaborate with those political representatives for attaining their objectives.

NUWODU (National Union of Women with Disabilities of Uganda) was established in 1999 because the gender aspect had been overshadowed in the Ugandan disability movement. In 2008, it started a new two-year-project to promote gender aspect in the activities of the disability movement. Challenges are many even when the political representation has been achieved. For instance, many WWDs on the ground did not even know the word, “human rights” when the DPO is taking a human rights-based approach in its activities. Could the mainstreaming of gender aspect in disability movement positively affect the lives of WWDs on the ground? How to balance empowerment and mainstreaming activities for maximising the outcome? With those questions in mind, I am going to scrutinise this project. 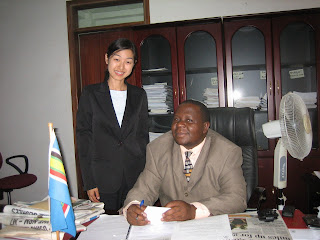 Ministry Madada and myself->
Posted by Disability-Uganda webmasters at 08:46