In December 2008, I had the chance to visit Uganda for the second time with the travel scholarship of Nordic Africa Institute.

This time, my main aims were to participate in the event for the International Day of Persons with Disability (IDD) on 3.12, the general assembly of Uganda National Association of the Deaf (UNAD), the general assembly of National Union of Disabled Persons of Uganda (NUDIPU), and to interview women with disabilities including deaf women in villages and DPO staffs dealing with gender project. In this short travel report, I shall present different dimensions of human rights realisation in practice. 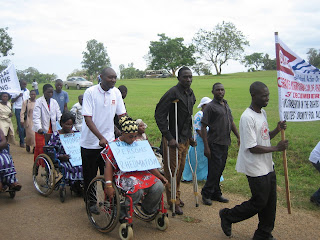 IDD event is held annually, while general assemblies in every five years. Both events were realised in the name of human rights, and yet looked very different in practice. IDD events are held in different regions every year, and this year was in the West at Mbarara which is the hometown of the current President. We first marched through the downtown with banners. Then, we gathered in a field to celebrate the Day with performances of different groups of persons and children with disabilities with the presence of the honourable guests such as the Minister of Gender, Labour and Social Protection. Various representatives of persons with disabilities made speeches. Other than deaf people who needed to be near the sign language interpreters, people sat according to the regions where they were from. The differences of impairments were not visible. Harmony dominated for promoting the same cause of human rights. 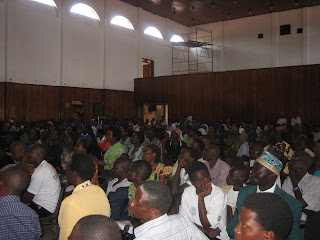 In the general assembly of NUDIPU, the umbrella organisation of DPOs in Uganda, different issues specifically related to different impairments, sex and age were all raised and negotiated particularly in the form of election of various positions in the board of the organisation. Different groups of people constructed alliances to strategise their election campaign activities. Lots of money was also involved during this campaign. Many undemocratic actions took place both inside and outside of the official venue. (I am not yet clear how I can write about these sensitive and yet important operationalisation practices of human rights in this case of the general assembly. I will figure out the way later and articulate these actions more in other writings.) Operationalising human rights of persons with disabilities is not simple. 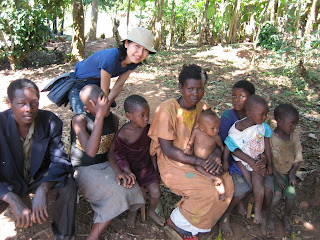 After participating in the aforementioned official events for the representatives of persons with disabilities from all over the country of Uganda, I decided to visit villages to meet deaf women on the ground. I visited three deaf women at their homes. They were not informed about those international and national events. They were just busy taking care of daily household chores and digging their gardens. They had never been to school and acquired any mother tongue. One of the deaf women’s mothers called her “kasiru (stupid)” all the time. (My assistant/interpreter, Benson, spontaneously intervened and explained to the mother, “It is not right to call her ‘kasiru’ because it is our problem that we do not know her language. If we know, we can understand each other.”). This extremely limited opportunity of deaf women on the ground explained one exercise of election during the general assembly of UNAD, the deaf association. Unlike the general assembly of NUDIPU where voters wrote candidates’ names to the ballot papers, elections of UNAD were held in another way: Each candidate was put a piece of paper with “I”, “II” or “III” on her/his back so that voters can draw those strokes instead of full names. This was due to high illiteracy rate of the delegates who represent different regions of the country. This speaks the profound discrimination against deaf people, especially deaf women. (Deaf women decided to establish their own association in 2009.) 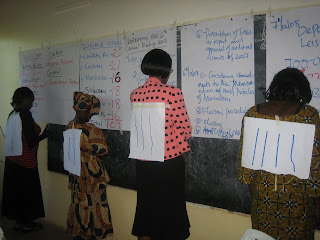 Right to vote and to decide own representatives is important. But preliminary findings of this trip left me with many operational challenges for exercising the right.


Acknowledgement
Last but not least, I would like to express my gratitude to many people who made this trip come true. First of all, I would like to thank Prossy, woman with physical impairment, who once again accommodated me to her house. We talked, talked and talked about so many things everyday. I am very happy to have learned to know her. I would also like to thank UNAD and NUDIPU that invited me to their general assemblies. The project team mate, Edson, and our project partners in Makerere University, Rukooko and Wamala, were also very supportive. I appreciate sign language interpreters’ and drivers’ works who wake up earlier than others and work longer hours than anybody else. I spent so many days and nights with many persons with disabilities due to the nature of those events. I am happy to have had the opportunity. I miss them very much. NUWODU and DPOD also helped me to collect important information on the gender project. Lastly, my family back in Finland, Jerri and Io, with my parents-in-law helped me and literally suffered from my absence, once again. I am still struggling with finding a good enough balance between this career and my role in the family. I stop this travel report by mentioning my sincere love to my family.
Posted by Disability-Uganda webmasters at 13:11