Operationalising the Convention phrase, “On an equal basis with others,” into practice in Uganda 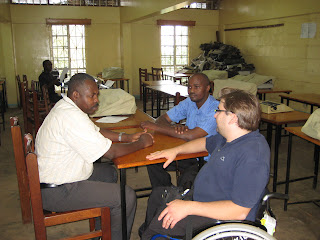 We start this article by introducing one story that took place in our research project. We are planning for our teaching course at Makerere University in Uganda in March 2010 to activate the discussion on human rights and disability and also to disseminate our preliminary research findings. We encourage students with disabilities from different African partner universities to attend this course. During the planning process we came across a question of accommodation. Accessible accommodation in Uganda means a lot of money expenditure. Only new luxury hotels are accessible, not the hundreds of guest houses around the city, not even the Makerere University Guest House. The funding of the course is not sensitive to these additional costs, which would take the costs of the budget even 300 % higher than planned. That is where it hits – prioritization! Do we accommodate everyone in the guest house that is not accessible for all? As we can not afford to accommodate everyone in a luxury hotel, do we cancel the course? What should we do? We felt that Jukka would need accommodation in an accessible hotel, but how about the local persons with disabilities? They are used to harsh conditions, and thus could they be accommodated in an inaccessible guest house?

With the introduced case above, this article tries to investigate the concept of equality in terms of the expression very commonly used in the Convention: "on an equal basis with others." For instance, in Article 12, it stipulates “States Parties shall recognize that persons with disabilities enjoy legal capacity on an equal basis with others in all aspects of life.” As states are the primary duty-bearers, “others” are assumed to be other citizens of the same territory and thus persons without a disability. However, we think that this interpretation is not simple in practice, particularly when the context is in a Southern country such as Uganda. We would like to provoke your thoughts with the following discussions based on our observations and also on our own experiences.

First of all, what happens when “others” in the same country or community do not enjoy human rights such as right to communication technology, right to education, right to work and effective access to justice? The Convention mentions all human rights to promote, protect and ensure (Article 1). However, they are mostly not accessible and ensured even to “others” particularly in a Southern country such as in Uganda. Does it mean that persons with disabilities under such a circumstance also have to suffer from not enjoying the rights “on an equal basis as others”?

Our question, therefore, is: could “others” mean persons with disabilities in the North for those in the South? We think this is a future-oriented but rights-based vision when equality is taken into account in real practice particularly in the South. Or are we too busy with our own human rights in our own countries? Is Article 32 the last thing after fighting for own rights in own countries? Whose equality counts? When the resource is scarce, what should be prioritized? We often face such questions in our research project, too.