Seminar on World Report on Disability and Finnish Development Policy on 13.12.at Helsinki 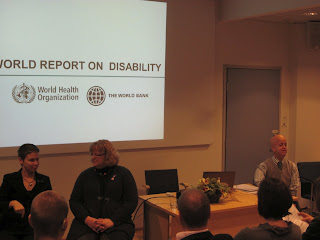 (Dr. Tom Shakespeare on the right)

The World Health Organisation and the World Bank launched “World Report on Disability” in this summer (http://www.who.int/disabilities/world_report/2011/en/index.html). FIDIDA (Finnish Disabled People’s International Development Association) and the Finnish Ministry for Foreign Affairs organised this seminar as a Report launch event. Around 70 people attended the seminar from various backgrounds and we had active discussions on this report from multiple perspectives.

Tom presented the Report as “practical document” which brings together “all scientific documents with evidences and data.” Kalle Könkkölä, the Executive Director of the Threshold Association, also commented that the Report made all those findings as facts, which used to be frequently treated merely as opinions of individuals with disabilities. For many persons with disabilities, findings are so familiar from their own experiences. But with this Report, you can make an argument to prove that they are scientifically researched evidences and facts.

One of the significant findings is that the number of persons with disabilities is 15% of the world population (1 billion) when functioning questions are asked. (Among them 110-190 millions are severely disabled.) This is much more than we have hitherto considered, namely 10-12%. This point, I doubted that there could be even more because still today many persons and children with disabilities in Southern countries are hidden at home and not included into existing official statistics, which was the case in Uganda, for instance. Markku Jokinen, the Executive Director of the Finnish Association of the Deaf, also pointed this out in his speech.

Tom emphasised the participatory methods which involved so many stakeholders, particularly persons with disabilities and their organisations. When international organisations of this size are involved, this should be a good example, even if it takes a lot of time and money, as Tom admit. This is the most accessible report ever made from the WHO. He has visited and will pay a visit to many countries to launch the Report in the near future. I asked him how a country could invite Tom for holding a similar event, especially when the concerned country is from the South. This trip to Finland was paid by Finland, while he said WHO could cover the cost for visiting Southern countries. I think this is an important opportunity for any Southern country to take advantage of, because the findings are perhaps most urgently needed to be disseminated in those countries.

Throughout all speeches, need of data on disability was repeatedly pointed out. One of the nine cross-cutting recommendations of the Report was also to improve the availability and quality of data on disability. It says, “data need to be standardized” and “internationally comparable to benchmark and monitor progress on disability policies and on the implementation of the CRPD nationally and internationally.” It is true that created knowledge and data are to a great extent difficult to purely compare because of the diversity of environment and contexts in which persons with disabilities live. In many Southern countries such as Uganda, lack of glasses or any other assistive devices hinder many children and people with disabilities from participating schools or engaging into works. Albinos are facing severe and many times life-threatening discrimination in Africa, while Northern countries have very different situations for them. These are just a few examples that could challenge the recommendation to be implemented. Also, I wonder if everything could be quantified to be comparable? Along the same line, lack of research on outcomes was pointed out. Due to the multiple levels of discrimination, interventions on one area could not bear enough fruits. Changes could be subtle such as psychological changes, which could not be easily transformed into concrete changes due to severe discrimination. But if we pursuit evidence-based data in terms of outcomes too much in the field of disability, there will be a danger, I think, that we tend to end up in interventions whose outcomes are easily quantifiable such as medical interventions and material supports. They are equally important, but I would not like to undermine efforts that are not easily showing concrete evidences and data that are comparable internationally.

It must have been very difficult to involve many stakeholders with the participatory methods of the Report. I highly respect the efforts. The Report is more than needed to make permanent positive changes to quality of life of persons with disabilities in the world, particularly in the South. Thank you for the speakers including Heidi Hautala, Minister for International Development and the organiser. This was a great seminar!
Posted by Disability-Uganda webmasters at 21:59