Hisayo in Ethiopia with the UN Special Rapporteur on Disability 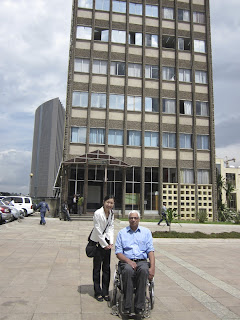 (In the picture, the UN Special Rapporteur and myself are in front of the older AU building. The new AU building is on the back.) Human rights-based approaches are multi-layered and both bottom-up and top-down. In Uganda, I investigated on bottom-up approaches. This time in Ethiopia, I accompanied the UN Special Rapporteur to observe his mission with a top-down approach. Namely, he had meetings with the African Union (AU), UN Economic Commission for Africa (ECA), the African Decade Secretariat Regional Office, the Ethiopian government, Finnish Embassy, American Embassy and an Ethiopian DPO for soliciting what it is called African Union Disability Architecture (AUDA) and African Disability Forum (ADF) that institutionally and practically facilitate promotion of human rights of persons with disabilities in Africa. The Special Rapporteur is going to establish the ADF in the form of an NGO as part of AUDA. When it comes to a top-down approach at this level, the biggest challenge is perhaps coordination. International agencies such as AU and UN ECA are required to listen to member states and coordinate for collective consensus for both policy and action. As the actors are many, coordination among them becomes one of the keys. Another challenge is to attract the actors’ attention to prioritize disability in their activities. As such international organisations have mandate to diverse issues, disability often becomes invisible, unless continuous reminder is made. For instance, ECA does not have any focal point or a staff whose mandate is to promote human rights of persons with disabilities. ECA has one staff who is personally interested in disability and works for it on a part-time basis along with his own mandate. AU has a Department of Social Development which encompasses disability. Considering the population ratio of persons with disabilities, 15% of the total population, as found out in the World Report on Disability (WHO and World Bank, 2011), it is disproportionate not to have staffs specifically dedicated to disability. Disability has to be taken more seriously both in policy and practice including allocation of staffs and resources. Today, various actors including the UN Special Rapporteur are concerned about this fact that disability has not been taken seriously. With his capacity as the UN Special Rapporteur, he visited these organisations and people to exchange and share information on the AUDA to be strengthened in the near future by combining their force. Finland and United States of America are now collaborating to facilitate the process on mainstreaming disability in African Continent. This so-called “Trans-Atlantic Initiative” is only at the initial stage. This was a fascinating opportunity for me to learn how disability is (tried to be) mainstreamed from the top of this level, which has not been interrogated in my previous studies except for the mainstreaming of disability in Japanese and Finnish development policies and practices at the governmental level (Katsui, 2008). The road map is becoming clear but the road itself is bumpy and far from straightforward. One concern would be that the AUDA process has the risk of leaving proper and meaningful involvement of organisations of persons with disabilities (DPOs) behind. For instance, when the African Decade Secretariat Executive Director, AK Dube, was discussing with the African Union and the UN Special Rapporteur concerning a working group meeting for finalizing the Continental Plan of Action for the second Decade, the number of DPOs to participate in this meeting has to rely on how much budget the Secretariat can use rather than securing enough budget for all the relevant DPOs to participate. That is to say, a top-down approach faces a similar challenge as a bottom-up approach: low prioritization, resource constraint, lack of capacity of actors and so forth. More thorough analysis on this trip to Ethiopia will be written in my forthcoming book to be published by the end of September this year. But these are immediate thoughts compiled in Addis Ababa Bole Airport, while waiting for my flight back to Finland.
Posted by Disability-Uganda webmasters at 12:39