Jukka (looking at the map) and Edson (trying to figure out where we are) in downtown Manhattan, New York. 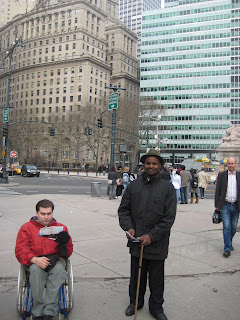 Our project was involved in a seminar ‘United Nations Convention on the Rights of Persons with Disabilities – Global and Local Views’, that was organized on 5 March 2009 by the Permanent Mission of Finland to the United Nations in New York. The seminar was made possible by the funding from the Human Rights Policy Unit of the Finnish Ministry for Foreign Affairs, to which we are thankful to.

The object of the seminar was to provide a space for discussion for people that have an interest in the implications of the United Nations Convention on the Rights of Persons with Disabilities (UN CRPD). Especially, the seminar concentrated on the dimensions of development, the focus of which was supported by the participation of a delegate from Uganda, Mr. Edson Ngirabakunzi and the Ambassador Ruhakana Rugunda from the Permanent Mission of Uganda to the United Nations. The academic affiliates, Mr. Michael Perlin (Director of the International Mental Disability Law Reform Project and the Director of the Online Mental Disability Law Program; New York Law School) and Mr. Michael Stein (Executive Director, Harvard Law School Project on Disability; Visiting Professor, Harvard Law School; Cabell Research Professor, William & Mary Law School) contributed in the seminar as well as Ms. Akiko Ito (Chief of the Secretariat for the Convention on the Rights of Persons with Disabilities).

The seminar revealed that countries were at different levels of implementing the convention. Individual countries appeared to be using unique approaches to ensure the UN CRPD is domesticated and implemented. Home grown approaches appeared to be at centre stage than following a particular design or approach. It was notable that disability mainstreaming was considered fundamental in all organs of the United Nations.

The seminar organized at the Permanent Mission of Finland to the United Nations in New York was a good kick-off for the enhancement of realization of human rights of persons with disabilities. After the adoption and coming into force of UN CRPD there has been a wide variety of actions and initiatives relating to the topic.

To our project, the seminar was a very good occasion to network with different stakeholders and to get precious input for our research undertakings!

We will get back to the blog with some substantial topics that were raised during the seminar !
Posted by Disability-Uganda webmasters at 07:25