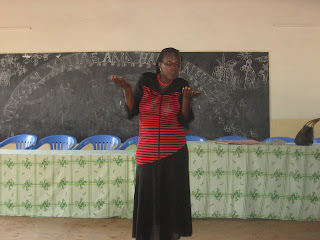 <-- Christine is the board member of UNAD as the women' representative and the chairperson of the Deaf Women's Association which will be registered soon.
I was born in a remote district in Uganda about 138 km from Kampala the capital of Uganda where the stable food is green banana commonly know as “Matooke” and coffee as a cash crop.

I am born to Mr. Eliphaz Lule and Mrs. Gertrude Lule. My father doubled as a self employed business man and a peasant farmer while my mother was a traditional African house wife. I am known as the first born because the actually first born died shortly after birth. My parents had 11 children but only eight survived childhood, of the eight 3 are boys the rest girls.

I was born hearing and enjoyed my childhood greatly because my parents were fond of their children. At the age of 8, I suddenly fell ill with severe vomiting; I then became unconscious and was rushed to a hospital. The doctors discovered that I had eaten poison. After two days (I was told) I gained my conscious but could hear nothing. I had lost my sense of hearing. Imagine what a disappointment I received when on checking the doctor confirmed that am now permanently deaf. I was in hospital for four months i.e. August – December. I was almost handicapped by the illness because I could either walk on my own or feed myself. Everything was done by my mother or her sister who assisted her because she (mother) had a baby of 6months. Well, although I was deaf I was happy that the devil had added more misery to his list of defeat.

On discharge we returned home but I no longer shared the jokes or the happiness with my siblings or friends. It took me a long time before I was completely healed. When I was fit I returned to school. To my surprise fellow student started mocking me by holding their ears ( indicating that am now deaf ) and laughed at me that I lost my cool and at times I resorted to fighting them or cried a lot. It was disheartening, to see the pupils I played with laughed with mocking me. To make matters worse my mother’s love began to fade. She was less interested in me that I wished I had died. It was Father who came to my rescue; he comforted me and told me deafness in not the end of the road.

I hated home and started to move with my father. He took me to Uganda School for the Deaf, where a new chapter of life awaited me. At first the Deaf children resented me because I could talk. They thought I hear and only pretending (not to hear). When I mastered sign language I was transformed. I studied hard and finished my study to the school. The Headteacher transferred me to a hearing school to continue my education to a higher standard because that time there was only one deaf school in Uganda and its standard was low.

I completed my studies in “0” level, and then took up CBR (Community-based rehabilitation) course and Sign language courses where I got certificates. I could not continue because in those days people despised the deaf yet had no money to go for abroad for further studies. I have accepted myself as deaf and do not look back. I first worked with World Opportunity International as administrator then with Uganda National Association of the Deaf as a sign language Instructor, and again as a Field officer under the same organisation but with the support of OXFAM before I joined Action on Disability and Development as a program coordinator (Deaf programme).

During my work I have experienced working with the most marginalized groups, deaf people without sign language skill and the poorest of the poor. I do enjoy working with them because I assist the uplifting of their standard of living and sensitize the parents and the community that deafness does not mean inability. It is the community we live in that disables us because they always refer to us as “kasiru” literally translated as “stupid.” We are not stupid. The problem is communication differences, i.e. we use sign language and the community use spoken language. Some have embraced sign language and made communication easy. Others have become our interpreters. Yet there are those who are hard to change. One cannot change the world in a short time. We hope in future we will have a positive, well developed country.
Christine Lule
joylule16@yahoo.com
------------------------------
Dear Ugandan disability activists,
If you are also interested in posting your life/organisational stories, please let me know.
Thank you, Hisayo
Posted by Disability-Uganda webmasters at 13:32