The World Federation of the Deaf Open Door Event 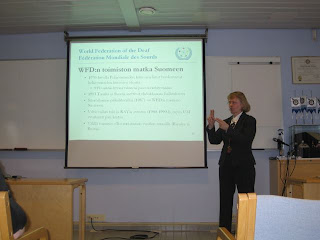 On 13th March, the World Federation of the Deaf (WFD) had an afternoon event to celebrate/announce the official registration of the association to the Finnish Registry. The following information is what I heard during the presentations of the current president, Markku Jokinen, and the previous president, Liisa Kauppinen (in the picture).

WFD is the umbrella organisation for the organisations of Deaf persons (when they stress their identity as a linguistic minority, they call themselves "Deaf" with big "d.") It was established in Italy in 1951 and currently has 130 member countries, of which 84 are Southern countries. The WFD has been advocating the human rights, particularly their rights for sign language, for the estimated 60 million Deaf persons around the world.

Markku also presented the findings of the new report of the WFD, "Deaf People and Human Rights," by Hilde Haualand and Colin Allen published in January 2009. It's the biggest study on the human rights of Deaf people covering the statutory services of 93 countries. They are almost all Southern countries, as the report did not focus on neither Europe nor North America. The main report is based on the findings of seven regional reports, that are also available on the WFD website (www.wfdeaf.org/projects.html).

The main report is, in my opinion, somewhat superficial, as findings from 93 countries were summarised. As the researchers themselves admit in the end of the report, the main weakness of the report is lack of analysis on the quality and accessibility of the services. For instance, the report mentions that there are this and that number of interpreters, or some TV programmes have simultaneous sign language interpretation. But are they accessible? Do they have TV and electricity at home??? When I think of Ugandan people, I had to ask these questions all the time. More qualitative data is found in the regional reports instead, which I personally enjoyed more for understanding Ugandan situation. This, however, is a very important report that covered so many countries to understand the discriminatory trend in all countries in many ways. It is worth reading!

The event was informative and interesting. Thank you for the organiser of the event!
Posted by Disability-Uganda webmasters at 09:50