In Memory of James Mwandha 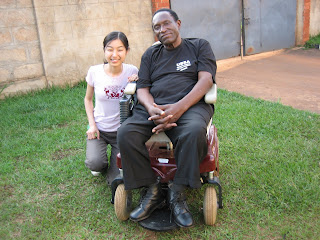 I heard the very sad news this morning that my friend and internationally well-known disability activist, Honourable James Mwandha, passed away. He is the very person who inspired me to start this research on disability in Uganda.

The first meeting with him was a good luck for me. In 2004, one of the Finnish delegation members who were heading for Washington D.C. for the World Bank Global Conference on Disability and Inclusive Development suddenly had to cancel the trip. The departure date was approaching and with such a short notice, many people turned down the offer to travel. The Finnish disability community then turned to me and I happily accepted to take the place.

The conference dealt greatly with what the title of the conference says…with only limited number of African representatives. Among the “white” crowd, the Ugandan delegation was outstanding. For instance, on one hand, the Ugandan delegation also included a personal assistant of James, Ambrose Murangira (then and current chairperson of the Ugandan Association of the Deaf) and Ambrose’s sigh language interpreter. On the other hand, many representatives from other Southern countries came by themselves without their personal assistants and interpreters, most probably due to lack of resources. I got very interested in Uganda and learned to know that James was then a Member of Parliament in Uganda. I remember very well that I asked so many questions to James and Ambrose concerning the Ugandan disability movement.

After coming back to Finland, I was commissioned to conduct an evaluation study of Abilis Foundation on four countries. I then included Uganda as one of the four. James helped me during this evaluation study. When I was looking for a woman with disability who could be my assistant, he introduced handful of them with high academic background! I was so impressed once again for the fact. My interests to Uganda increased as time went, as the assistant , Ruth, was so clever and effective and yet a very warm person.

When I finally visited Uganda in January 2008 with the current research, I witnessed how much James was respected. People called him “Honourable Mwandha.” He welcomed me warmly to his home and gave all information and contacts over many cups of tea and sweets. He even made the appointment for me to meet the Minister Madada who is in charge of disability issues in the government. Being a young and female researcher is sometimes challenging in Uganda where elder and male figures are more respected. Yet James always treated me as an equal person.

He was very sharp and proactive in his thinking. He had many ideas and visions. Any meeting became very dynamic and future-oriented when James was present.

He lost the election in 2006 when the multiparty political system was introduced to Uganda. He belonged to the opposition, which people say is the reason for his defeat. He said, “I’ve never regretted for changing the political party.” He was a strong and honest disability activist and politician.

I also know him as a warm father and grandfather. He showed pictures of all his children and grandchildren, some of whom I met.

We just agreed that he would be one of the advisory board members for the next project, too, once the research funding is granted. I wanted to learn much more from him.

I just like to say “thank you” to James for the friendship and much more.

May his soul rest in peace.
Posted by Disability-Uganda webmasters at 14:26