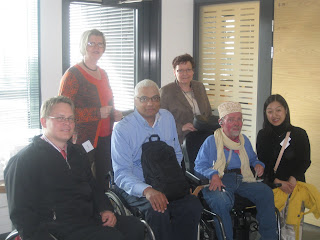 Mr.Shuaib Chalklen visited Finland for the first time. Finnish DPOs (organisations of persons with disabilities) (and a few others including myself!) had the chance of meeting with him to discuss hot issues in Finnish and global disability movement in the premise of the Finnish Association of People with Physical Disabilities on 25.5. Around 20 representatives of DPOs attended the meeting.

He has been the Special Rapportuer since August 2009, but he described the first period as "lonely." He was appointed to the position without available resources, and so works from his home computer! Despite the circumstance, he promised to make efforts in 1) promoting ratification of the Convention on the Rights of Persons with Disabilities to as many countries as possible, 2) mainstreaming disability into development (refering to the Article 32 of the Convention), 3) linking activities to the Millenium Development Goals and 4) giving priorities to more vulnerable people among persons with disabilities such as women and girls with mental disabilities and persons with disabilities in African countries.

His experiential knowledge of the needs of both bottom-up AND top-down approaches was interesting and insightful. Continuous pressure to various actors, both local and international, are needed to build more dedicated institutional structure and focal point of disability in the current system including United Nations and the World Bank. I think this argument is also applicable to national structures as well. Disability rights have been somehow marginalised and dealt with by ad hoc units. But it is high time to commit to it in terms of resources and institutional structure. I agree with him.

I'm sure his coming had a good impact on the Finnish government, disability movement and disability research. Thank you, Shuaib, for coming. Hope to see you soon again.
Posted by Disability-Uganda webmasters at 20:51