Professor Finn Tarp, the Director of UNU WIDER, at the Finnish Foreign Ministry 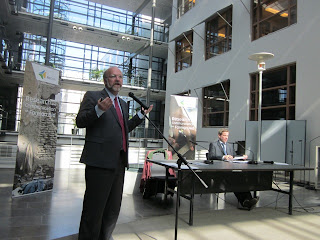 It is always extremely interesting for me to learn from different disciplines how they deal with the same issue. Today, I had the chance to attend a seminar, “Does Aid Contribute to Economic Development?” at the Finnish Ministry for Foreign Affairs (more in details at http://www.wider.unu.edu/events/ReCom-events/en_GB/15-05-2012/). The presenter was Professor Finn Tarp of the Director of UNU WIDER (United Nations University, The World Institute for Development Economics Research). He is an economist. He made his presumption very clear that the aid (sic) has contributed to economic development and growth of recipient countries even though some money has been wasted. Based on his research and statistics, he argues that the presumption is correct with the example of 3 out of 36 studied Sub-Saharan African countries had positive effects on GDP or investment. He explained with 25 USD per capita aid per year in a Southern country would increase GDP per capita by 0.5% compared with a country without it, poverty (less than 1,25USD per day) decreases by 3,5%, increases life expectancy at birth by 1.3 years and so forth. He stresses the importance of macro statistics by articulating them as “careful evidence” and “proper works” compared with critical statements to aid without macro statistics. During the discussion session, he introduced 69 formula. For instance, when the annual growth is 3%, it takes 23 years to double the growth. He highlighted, “growth is just one element, but often an important element.” Throughout his presentation, I felt uncomfortable with his generalized concept of growth as if it is a positive thing for everybody. Economic growth of a country could jeopardize relative situation of more marginalized groups of people, when they are left out from the general development. General growth can be both opportunities and challenges for such people and not necessarily a positive thing to take for granted, if the growth leaves them behind. In this regard, his concept of growth has excluded persons with disabilities because trickle-down effect does not take place as a natural matter of fact to persons with disabilities. For instance, UNESCO states, “More than 90% of children with disabilities in developing countries do not attend school” still today (http://portal.unesco.org/education/en/ev.php-URL_ID=32969&URL_DO=DO_TOPIC&URL_SECTION=201.html). Along with the same line, his focus on macro statistics leave out equally important qualitative evidences of lived experiences of persons with disabilities, thereby systematically exclude them from the mainstream discourse of growth, because persons with disabilities are often officially not registered and thus not recognized in different kinds of statistics. Here, I am not arguing that international and development cooperation does not make impacts, to be clear about my positioning. As a social scientist, I am questioning the quality of data in such macro statistics whether they accommodate 15% of the world population who are persons with disabilities. Economic growth is indeed only one element, as he states. However, I got the impression from today’s seminar that it still dominates over a number of important elements including rights to development of persons with disabilities.
Posted by Disability-Uganda webmasters at 13:18