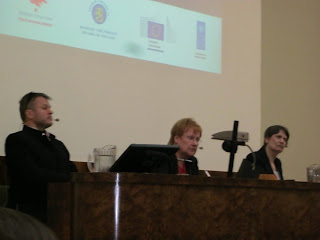 (From the left, Chairperson Professor Teivo Teivainen, Tarja Halonen, and Helen Clark) With the theme of “Resetting the global development agenda at the Rio+20 summit,” Helsinki University organized lectures by the two distinguished speakers in collaboration with the Finnish Ministry for Foreign Affairs, European Commission and UNDP on 7.5.2012. The former Finnish President, Tarja Halonen, stressed political leadership as well as strong commitment of all actors for sustainable development which entails not only economic but also environment and social justice as a whole. She called for the end of “tyranny of GDP” and for the need of establishing more comprehensive index of measuring development. She highlighted human rights as important to empower people for making sustainable choices. Helen Clark, former Prime Minister of New Zealand and administrator at UNDP, also stressed human development. She pointed out the lack of political will and incentive because of the fact that political cycle rewards short-term actions. Various challenges are there such as divisions between politicians and activists, poorer people and rich people (the former of whom disproportionally face risks), poorest countries and middle-income countries (the former cannot access to existing international funding) and so forth. She, however, stressed that sharing best practices is important. For instance, the global reaction to the Ozone layer was possible, while Ethiopia has green economy strategy even though it is one of the poorest countries. In the question and answer session, which invited also questions from Tweeters who followed the seminar online on live, Halonen introduced an example of Cider index. When different kinds of Cider are evaluated, it is hard to say which is better because people look at different aspects of Cider with different values. Development is the same. There needs to be many different indexes, from which good political balance on different issues should take place, she argued. During the whole session, “poorest people,” “women,” and “unemployed people” were mentioned but once again disability not even once. Halonen says, “All these are ethical choices.” How ethical it has to be for persons with disabilities to be included in the mainstream discourse? Perhaps good aspiration and ethical consideration are not enough any longer, as evidences have been accumulated. She encourages university students to “try to find new ideas seriously.” I hope many of the readers are encouraged to study this area seriously.
Posted by Disability-Uganda webmasters at 14:28