KEPA development policy day: disability as an indicator for a human rights-based approach to development? 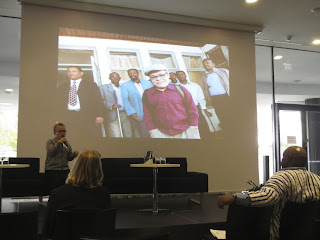 (<-- Tuomas Tuure is speaking on the left) KEPA, the Service Center for Development Cooperation in Finland, held its Development Policy Day. 170 people, most of them from the Finnish NGO Sector but also from the Foreign Ministry and academic community, participated in this seminar. Speakers were:
- -  Maina Kiak, the UN Special Rapportuer on the Rights to Freedom of Peaceful Assembly and of Association,
- -   Mirjam van Reisen, Professor of International Social Responsibility at Tilburg University,
- -   Erkki Tuomioja, the Minister for Foreign Affairs of Finland,
-   Anabela Lemos and Tuomas Tuure as the Finnish NGO reprensetatives.

All were concerned about the shrinking space for civil society ironically after the Arab Spring. Many challenges were also presented including the division between service delivery-oriented and watchdog-oriented NGOs; between Northern and Southern NGOs; between domestic and international policies of Northern states (double-standard), and so forth.

Ethiopia was much focused due to the restrictive state environment against civil society. On the one hand, Kiak and Reisen, are of the view that development aid should not go to such undemocratic governments and prefer democratic ones by highlighting values. On the other hand, NGOs are finding ways to deal with such difficulties in creative solutions. Tuomas Tuure of the Threshold Association introduced how creatively it deals with human rights when governments are not tolerant to human rights. As disabilities are often considered as social issues, this was used as a tool to cut into such contexts. Disabilities are not threatening political issues in many countries. This is one characteristic of disabilities.

I think on the other side of the coin is that disabilities are still not human rights issues. They are often not included into mainstream discourse of development. Conversely, this means that proper inclusion of persons with disabilities could become the benchmark of comprehensive development cooperation. This could be even an indicator for measuring a human rights-based approach to development that the Finnish government is trying to promote. All the speakers were in the strong believers on people’s power and democracy. That democracy should not leave marginalised groups of population.
Posted by Disability-Uganda webmasters at 22:37